You’ve heard me talk about how much I love my FitBit Ultra, a a small device that not only counts your steps, but calories burned, physical activity, stairs walked and much more. But the power of all FitBit devices is when you sign-up for an account on FitBit.com. More on that later.

The folks at AT&T (Hi Elyssa!) know how much I love my FitBit Ultra, and they loaned me FitBit’s Aria Wi-Fi Smart Scale to test out. Did you know that AT&T sells other gadgets besides smartphones and phone related accessories? I had no idea until they told me. (By the way, the new FitBit One syncs with your phone’s FitBit app via bluetooth!)

It’s true. I  have proof. AT&T is even offering a FitBit Zip and the Aria scale for one of my lucky readers! 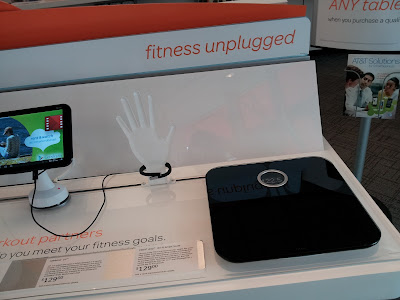 Sadly, this is the only photo of the Aria scale I took that didn’t have my weight or percentage of body fat on it. While I love you all, dear readers, I’m not ready to share those numbers with you. Let’s just put it this way. If fat floats, I might survive a shipwreck.

The Aria scale isn’t just your typical scale. Not only does it measure your weight down to a tenth of a pound, it also measures your body fat (you must stand on it with bare feet). Here’s the cool part. If you’ve connect it to your account at the FitBit website, it will automatically sync the info with your account! No more writing down your weight and what time you stepped on the scale. The Aria does all that for you.

Best of all, you can invite up to 7 more people to “join” your scale. After the first few weigh-ins, the Aria learns who is on the scale. It can tell the difference between my husband and I. His weight info private-I can’t see it on my FitBit Dashboard. If you don’t have an account, you’re missing out! Anyone else who weighs themselves will show up as “Guest” on your dashboard. Like my son Jaxson who thinks it’s hilarious to weigh himself and then again while holding various things. Or my daughter who weighs herself before she uses the bathroom and then after (a true scientist, that one).

I recently joined a private weight loss challenge group. Not because my main goal is to lose weight, but because I want support to make healthier lifestyle changes. Part of this is sending in my weight each week. I have not owned a bathroom scale in the time I’ve known my husband (over 15 years). However, having one helps me stay on track with my healthy lifestyle goal. I know the better I eat and the more I exercise, the better I will feel and those extra pounds will drop off! The Aria is a great tool for me because I’m not just looking at the pounds but my BMI and my percentage of body fat as well.

Ok, who’s ready to win a pair of devices that will make it easier to track your fitness journey and healthy lifestyle? Thanks to AT&T, I’m giving away not only the Aria Wi-Fi Smart Scale but FitBit’s new activity tracker, the FitBit Zip. You just clip it to your belt or put it in your pocket, then go about your day. The FitBit Zip will track your steps, calories burned, and floors climbed. Together, these items are a valued at $190!

To enter, just use the Rafflecopter form below. (US addresses only)

Thanks AT&T for loaning me the Aria! No compensation was received for hosting this giveaway. I think they’re awesome products and wanted one of you to win them! Of course, all opinions are my own.