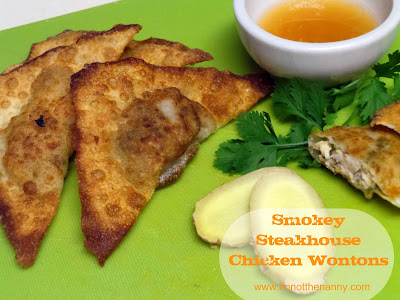 Finger foods like crispy wontons are fun to make and are perfect as appetizers. Or as your main course when served with steamed rice and a veggie. Making wontons are an easy to get your kids involved in cooking. Over the weekend, my 3-year-old sous chef and I made these smokey steakhouse chicken wontons. They were a hit with both kids. 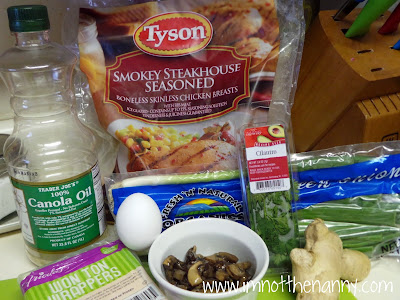 I was challenged to create a recipe with Tyson’s new Smokey Steakhouse Seasoned Chicken Breasts. The obvious thing to do would be to cook it as is and put it in a wrap, sandwich, etc. I wanted to think outside the box a little bit. 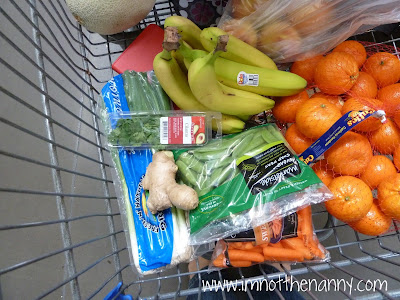 Besides the chicken breasts, I used mushrooms, ginger, cilantro, and scallions in the wonton stuffing. (Recipe with exact measurements at the end of the post.) I was actually impressed that I found all of my ingredients at Wal-mart, especially the wonton wrappers, cilantro, and fresh ginger root. For more photos of my shopping trip, take a look at my Google+ album. 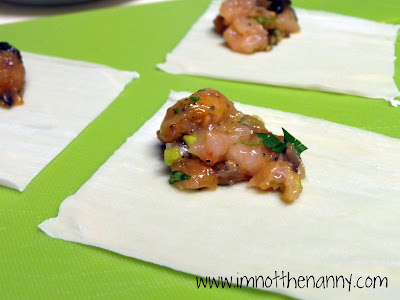 For the stuffing, I chopped the raw chicken into small pieces. I like that each chicken breast is individually frozen so I can use as many as I need without defrosting the entire bag.  You can easily use a food processor, but I was too lazy to pull mine out. Then add chopped cilantro, scallions, and minced ginger. Since the chicken is already seasoned, I didn’t add any salt or pepper. I was impressed that each serving of the Smokey Steakhouse Seasoned Chicken only contained 460mg of sodium (19% of daily recommended). I usually avoided pre-seasoned meats because there’s too much sodium. Not so with Tyson’s. 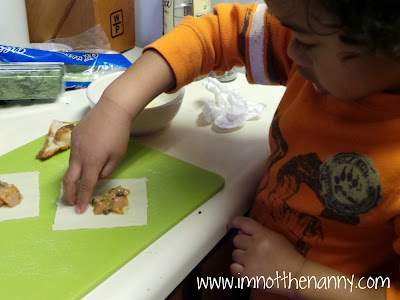 Jaxson, my 3-year-old, begged to help cook. After I placed the chicken mixture in the middle of each wrapper, he added “glue” around the edges of the wonton wrapper. The glue is just a one egg white mixed with a splash of water. This helps to keep the wrapper closed after you fold them. We made them assembly line style, about 3-4 at a time because that’s how many my cutting board could comfortably hold at one time. 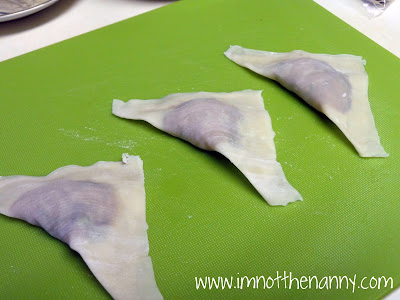 Because the wonton wrappers I bought at Wal-mart were square, I opted for a triangular shaped wonton. Circular wrappers will work too (sometimes called dumpling wrappers). Make sure you close from the middle out to get rid of any extra air. The air will create a bubble in your wontons when you fry them. 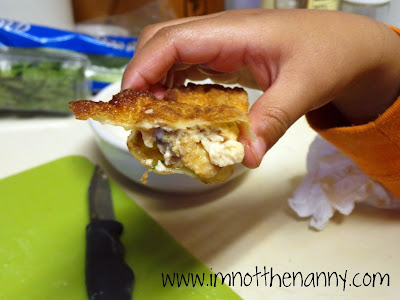 I fried the wontons in skillet with a small amount of canola oil. They cook fast so don’t turn your back! Here’s my guy proudly showing off his yummy wonton. He must have eaten 5 or 6 of them before we even sat down for dinner. These wontons freeze well, too. Just freeze the uncooked ones and you can steam or pan fry as little or much as you want.

How did they taste? Delicious! I made a dipping sauce for them, but they tasted better on their own. I wasn’t sure how I’d like Tyson’s Smokey Steakhouse Seasoned Chicken Breasts, but I was impressed. I also have their new Southwest Pepper Trio seasoned chicken breasts and plan on making enchiladas with those. For more recipe ideas, visit the Tyson website.

Do you cook with pre-seasoned chicken? What do you make?

Mince/chop the chicken into small pieces or pulse in a food processor until it looks like a paste. In a large bowl, combine scallion, mushrooms, cilantro and ginger root. Mix well. In a separate bowl, mix egg white and water to make the “glue.” Place chicken mixture in the middle of a wonton wrapper. Dip finger into the egg white mixture and trace edges of wonton. Fold over to create a triangle, taking care not create air pockets. Add enough oil to coat the bottom of the skillet. When is oil is hot, place wontons into pan, taking care that they do not touch. Fry until edges turn golden. Flip and fry until done. Place on paper towel to soak excess oil.

I am a member of the Collective Bias® Social Fabric® Community. This shop has been compensated as part of a social shopper insights study for Collective Bias® and Tyson Foods #cbias #SocialFabric All opinions are my own.