Yesterday I shared our favorite new video games and toys, but today let’s talk books for the younger kids in your family.  After reading the holiday gift guide of multicultural children’s books, you’ll need to make room on your bookshelf. They are winners in our home.

Books for Babies and Preschoolers

I adore this series of board books by Amy Wilson Sanger featuring snacks from different cultures. The artwork is fun, colorful and clever.  I wish I had seen these when my kids were younger! What a fun way to introduce new foods to your kids.
Books in the series:

Spicy Hot Colors: Colores Picantes (August House) by Sherry Shahan is a book of colors that is vividly illustrated by Paula Barragan. The text describes the bold bright colors with a Latin flair and a smattering of Spanish.

For my musical boy, Squeak, Rumble, Whomp! Whomp! Whomp!: A Sonic Adventure by Wynton Marsalis was the perfect picture book to get him dancing. It’s full of onomatopoeias, that will introduce your kids to the sound around them and the music they can make.

Nightime Ninja by Barbara DaCosta might be sparse on words, but illustrator Ed Young captures the story quietly (like a ninja) and beautifully. Late into the night, a little ninja creeps through the house in search for treasure, but not the kind you’re thinking of. The surprise ending was a hit with Jaxson! 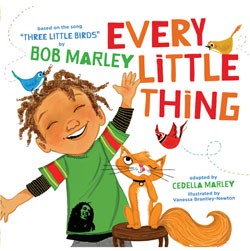 Every Little Thing (Chronicle Books) by Cedella Marley, based on the song “Three Little Birds” by Bob Marley. Looking for a book with a dark-skinned boy as the main character? This is the book for you. This book shows how all the emotions kids feel are normal and with love from their family and friends, “every little thing is gonna be all right.”

Books for Ages 5-8 (or younger with an adult)

Written by Leslie V. Ryan, the picture book I am Flippish! is inspired by a true event. Sean is little boy whose classmates don’t understand why he doesn’t look like his dad. Thankfully, the kids have a smart teacher and encourage his students to discover their own family’s ancestry. Together the students learn that Sean is Flippish, part Irish American and and Filipino American. The classmates start creating their own words to describe their cultural background too. 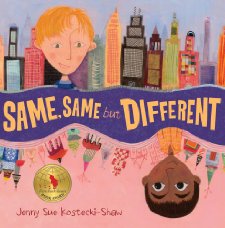 Same, Same But Different (Lee and Low) by Jenny Sue Kostecki-Shaw is about two pen pals, one lives in a large city in the United States and the other lives in India. Through their letters and drawings, the learn about each other’s family, culture, and country. They discover that even though they live in two different places, they have many things in common. Jaxson loves the illustrations and story in this book. It’s in constant rotation during our library visits. 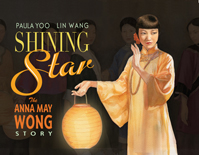 With my theatre background, I’m always excited to see Asian-America actors in mainstream entertainment. When I saw Shining Star: The Anna Mae Wong Story by Paula Yoo, I immediately picked it up. I knew Anna Mae Wong as one of the first Asian-America lead actors in Hollywood, but knew nothing about her story. Her search for meaningful roles for Asian-Americans is the same struggle many Asian-American actors face today. Yoo’s book share’s Wong’s rise to fame and how dealt with the racism she encountered in 1930s Hollywood.

I have lost count how many times Sophia has re-read Where the Mountain Meets the Moon by Grace Lin. With the feel of a folk tale and the magic of a fantasy, the story follows Minli and her quest to find the Old Man on the Moon. Her adventures are peppered with folk tales about Chinese dragons that Minli heard from her father. Not only has Sophia read this book twice, she’s even read passages out loud to me.

Sophia goes in phases when it comes to The Rainbow Magic Fairies series, but I notice that she tends to choose the books that have a fairies that look most like her. Or has darker skin like she does. This goes to show how important it is for kids to see themselves represented in the books they read. Her latest is  Sabrina the Sweet Dreams Fairy by Daisy Meadows. I know the text in these books are no longer challenging for her but she still has a soft spot for fairies. 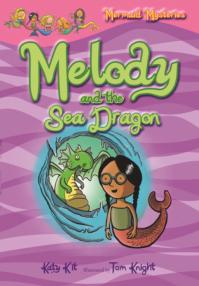 Mermaid Mysteries: Melody and the Sea Dragon (Albert Whitman & Company) by Katy Kit is the fourth book of the Mermaid Mysteries. Sophia loves fantastical creatures, with mermaids at the top of her list. The five mermaid friends work together to solve mysteries in Mermaid Bay. While the mermaids are a diverse group (skin tone, hair color, etc), the series isn’t about race or culture. I like that Sophia can see herself in one of the mermaids. It’s good for her see characters that resemble herself in books she reads. This was sorely lacking for me growing up. That’s why I love discovering chapter books like the Mermaid Mysteries.

Christina, the main character of Orange Princess Has a Ball by Alyssa Crowne, is Korean American. She wants to dress up as a princess for her school’s fall ball. Her grandmother sews a beautiful Korean princess dress, but it’s not the puffy sleeved, full skirted dress that Christina dreamed of. Add an annoying little brother and Sophia could totally relate to Christina. The book raises great themes in a manner any little girl can relate to: lying, multiculturalism, princesses and more.

I’m happy we discovered Spirit Animals Book 1: Wild Born (Scholastic) by Brandon Mull. The series is about four children in the world of Erdas who discover they are one of the chosen few who has a spirit animal. This gives both child and animal great power which they will need to save the world. Doesn’t that sound fantastic? Sophia read it in one sitting. We are eagerly awaiting the next book in the series Spirit Animals Book 2: Hunted is written by Maggie Stiefvater due out in January 2014.

Those should keep your kids busy during their winter break so hopefully you’l have time to read your own books! What books are your kids asking for this holiday?

Don’t forget to enter the giveaway for a Skylanders SWAP Force Starter Kit.

Did you miss these my Foodies and Games & Toys gift guides?