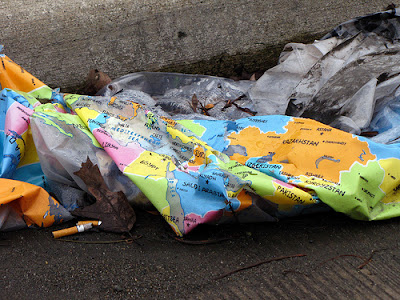 Photo by kendura99 via Creative Commons

I’ve been asked this question countless times throughout my thirty-four years of living in the United States. I was born in October 1978. If you do the math, it means I’ve been living in the US since I was born. Technically, that makes me an American citizen. My passport even says so.

So why do people feel compelled to ask for my nationality?

Why not my cultural background? Or my ethnicity? Why ask at all? Is it because I’m not Caucasian?

Back in my fiery high school and college days, my quick retort would be “American.” Then I’d let the person flounder for a few seconds before adding, “I was born in Louisiana.” Last night I didn’t even have the patience. I was already cranky because of the poor customer service I received at the fast food restaurant. (The bad customer service had nothing to do with my race or ethnicity. Just folks who can’t think outside the box.)

It was just my kids and I eating dinner as we waited for my husband to meet us after work. As we ate, a young employee (younger than me at least) walked past our table a few times, giving us curious looks. Finally she stopped by our table and offered us mints. I told her, “No, thank you,” and turned my attention back to my kids. She hesitated and walked away. Seconds later she turned around and dropped the question, “What is your nationality?” She must have been dying to ask me that for the past fifteen minutes.

I can’t say I was nice to her. I wasn’t mean either. I only gave her my stock answer “American.”

It really pisses me off that people assume I’m not American based on how I look.

This young lady is African American. Do people ask her what African country or Caribbean island she hails from? I would guess not unless she spoke with an accent, which she didn’t have. Heck, I don’t even have an accent unless you count my southern drawl that makes an appearance after a few shots of tequila.

Interchanges like this make me angry. I’m sure this person was just curious and meant no harm. Meaning no harm does not mean it won’t offend.

I’m tired of having to explain that even though I have small almond eyes, light skin, and straight black hair, that yes, I really am American. Being asked for my nationality on the assumption that I am not American assumes that all Asian Americans are foreigners. Resident aliens. That’s what we call non-native residents, right? Aliens.

I’m considered an alien in my birth country, the only country I have ever known. No, I have never gone back to Vietnam. I can’t go back if I’ve never been there. Yes, I only want to go there to eat the food. The Chinese were one of the first Asian-American immigrants when they became cheap labor for the transcontinental railroad. I’ll bet even Chinese Americans who can trace their family that far back are still asked what country they come from.

Remember the Japanese internment during World War II? Japanese citizens quietly hustled and transferred like cattle into internment camps because their ancestors were Japanese. No one locked up the Italians Americans during World War II. We were doing the same thing to Japanese Americans that the Nazis did to the Jews. Back when I took history class in high school, that ugly part of United States history didn’t even receive a mention.

I wish I could say that how our society perceives race has evolved since I left my small Louisiana hometown fifteen years ago. Actually, it seems that we have regressed.  Don’t believe me? Read this story about Seema Jilani’s racist encounter at the White House correspondent dinner, and tell me how we see race today.

So how many more years must Asian Americans live in the United States before we’re no longer asked for our nationality?  How many more generations before we’re subconsciously accepted as American citizens? Every time someone asks us for our nationality, it’s like a knife in the back. Sure, we can live in our country and become a famous chef (David Chang), a famous architect (Maya Lin) or an Olympic medalist (Michelle Kwan), but we’ll never be part of your club. That’s how that question makes me feel.

I ask that the next time you’re curious about a person’s ethnicity or cultural background, think about how you word your question. Or maybe you don’t ask at all? Maybe you get to know that person and you’ll learn about their deep dark secrets organically, like we all do with our friends.