I planned on getting as much reading in as I could during my press trip on the Carnival Breeze. I even debated buying an e-reader for my week long cruise. Instead, I convinced the nice folks at AT&T to lend me a Pantech Element tablet for my trip. The main selling point for me? 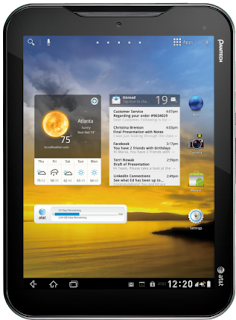 Yes, you read that right. This little Android table is waterproof. As in take it in the shower (yes, I tested it just for you, my readers) or in the tub for some reading (did you have to ask?). Let me back up a little bit.
The Element has an 8″ HD display. At 8.36 x 6.12 inches and less than a half inch thick, the tablet fit perfectly into my small purse. Weighing teeny bit over a pound, the tablet felt sturdy in my hands but not too heavy. Because it uses an Android operating system like my Samsung Galaxy S 2 phone, it didn’t take long for me to figure out the Element. Within minutes, I connected my Gmail accounts to the tablet and downloaded my favorite social networking apps.
The main reason I tested it was because I wanted to read books on it via the Kindle app. By the end of my cruise, I was using the Pantech Element so much, I started wishing I could make phone calls on it. Technically I could Skype since it has a front facing camera. The only time the tablet left my side was when the kids commandeered it to play games.
This little tablet became indispensable. When my 3 year old Jaxson became restless during our seated dinner on the cruise, I whipped out the Element to entertain him until his food arrived. We usually have a no electronics rule at the dinner table, but it gave me and my husband a chance to enjoy a gourmet meal and eat it while it was hot. Jaxson even taught our waiter how to play games on the Element.
My favorite day during our cruise was our morning at Long Bay Beach in Antigua. After a bus tour through the island, we spent a glorious 2.5 hours on soft sand and clear blue waters. I tucked away my digital camera, and took photos with the Pantech Element instead. Because it’s protected against water immersion for up to 30 minutes up to 1 meter deep, I walked right into the ocean with the Element. My favorite photos from our cruise were taken that day on the Element. I even took my daily video that day using the front facing camera. (Note that the touchscreen might not respond if it becomes wet or if your fingers are wet. The easy solution is to dry off the screen and your fingers.)
Later that evening back on the Carnival Breeze, my fellow attendees on the press trip couldn’t stop talking about the Element, so I gave them a go at it. They noticed that I took it into the ocean during our beach trip and were very curious. They were suitably impressed.
The Pantech Element fits in my well in my hand, especially when I’m reading an ebook. The rear facing camera takes beautiful photos in daylight. However, even with the flash I was disappointed with photos in low lighting. Zooming in to take photos required too many steps. I wish I could pinch the screen to zoom, but I had to go into settings to zoom in or out which takes precious seconds when I’m capturing photos of my fast moving kids. That’s basically my only issue with the tablet, which can be a deal breaker if you take a lot of photos. The tablet takes a microSD card up to 32GB so it will be a while before you run out of room for your photos.
This was also my first time using a device on the AT&T network. I was kind of sad to learn that AT&T’s 4G LTE data network was much faster than my Sprint 4G network. I might have to switch carriers when my contract is up!
And yes, I did read a couple of books on the Element, but not as many as I planned. That’s only because there were so many other things to do on the cruise. I was very sad to send it back. Now I want a Pantech Element of my own.
Thanks to AT&T for loaning me the Pantech Element. Opinions are 100% my own.