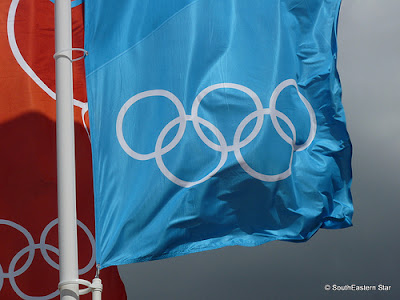 Sophia and her dad watched many Olympic competitions while I was in New York for BlogHer. She’s fascinated by the Olympics. Even more excited that her cousin (from dad’s side) Seimone Augustus is playing on the US Women’s Basketball team. They’re working hard and will be competing against France for the gold.. It’s exciting for Sophia to feel so closely connected to the Olympics. We’ve seen Seimone play against the Washington Mystics a couple of times and waited to chat with her after the games.

Sometime last week, Sophia announced to hubby, “I’m going to be the first Vietnamese African American to win gold in the Olympics!”

Never mind that she’s currently not participating in any sports. She just so proud to be American. And Vietnamese American. And African American. I have no idea if any of the US Gold Olympic winners are Vietnamese-African-American, but I’m not going to burst her bubble.

I’m glad she’s so excited. I don’t think she’s seen 16 year old Gabby Douglas’ gymnastics’ performance yet. I think Sophia would be proud. (We’re going to ignore all the unnecessary drama about her hair. Dude, she’s 16. AND she’s competing. It’s about substance, no looks.)

Then I have a feeling someone’s going to ask for gymnastics lessons.