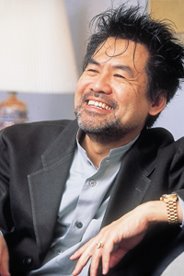 I’m sharing an older post from my old blog about Asian American playwright, David Henry Hwang. I discovered his Tony award winning M. Butterfly as a college student. His plays challenge everyone’s assumptions and views of Asian Americans. In March of 2009, I attended Hwang’s talk at University of Maryland. Here were my thoughts after hearing him speak.

I discovered playwright David Henry Hwang in college. I had no idea that Asian-American playwrights existed. Growing up as the only Asian-American family in our rural southern town, most of the non-family Asians/Asian-Americans I saw were on television. Back then, the most interesting thing to watch was Margaret Cho‘s sitcom All American Girl. Most of the other roles were rather stereotypical.

A huge light bulb came on when I read Hwang’s M. Butterfly. Where had he been hiding? His plays represented real, human Asian-American characters. I even wrote my undergrad thesis about M. Butterfly. So I guess I have a literary crush on David Henry Hwang.

Hwang shared how he became a playwright. He never planned to write about the Asian-American experience. (I also took a lot of great notes on his creative process, but that’s another post.) The main themes that resonated with me tonight were his views on authenticity, identity, and race.

His questions made my brain whirl. My brain spoke so loudly, I had to turn off the radio on the drive home.

So what exactly is authenticity? For example, what is really being Chinese versus what we’ve been told by media, stereotypes, people, etc? We’re continually on a journey to discover who we are and what makes us different. Our identity.

However, is ethnicity key to your identity? Growing in that small town, I felt like being Vietnamese was my identity. That’s how the community categorized me–it made them less uncomfortable around my family if they could put us in a little box. So what did I do? I shunned it. I tried to be as American as possible, as American as my parents would let me. In college, I tried to absorb as much Asian-American studies as possible. As much as I could at a small southern college. I made being Vietnamese my identity.

Hwang’s next statement really stood out to me (paraphrased): Identity changes as we go through our lives. Ask yourself “Who am I?” at different points in your life. That is how you discover your identity.

Wow. He’s so right. My identity is who I am right now. I can’t fester on my past actions nor can I worry or control my future ones. Focus on the current you. So often, I’m thinking about what’s next, I don’t stop and enjoy just being me.

Race does not equal culture. Growing up, he thought that being Chinese was like having red hair. It was just something biological. Culture makes you who you are: your family, your community. Now that I’m older and make my own decisions, I can choose my community. However, I’m constantly trying to figure out where I fit in my community. I know I’m not alone in that feeling. As I change, I re-evaluate how we fit together.

My daughter is biracial (or whatever the latest greatest pc term for it is), but that’s just how she was born. She didn’t choose it. Her race says nothing about her personality. There was no way I’d know she would be a girly girl, loves pink, and wants to be a princess. We talk about skin color when it comes up, but I don’t want her to define herself by her skin.

I needed to learn that my identity is not based on my race/culture. It took me a long time. I hope with my help that Sophia will learn it much much sooner than I. I grew up in small town. She will grow up in a culturally diverse area. I’d like to think her journey is easier. But she won’t have to do it alone.

I found out that Hwang will be in DC this weekend for The Asian American Literary Review 2012 Symposium. He and other Asian American writers will be reading their responses to artwork in the Portraiture Now: Asian American Portraits of Encounter at the National Portrait Gallery (part of Smithsonian Instutition). Now I have to figure how to get myself there and whether I should take the kids or find someone to watch them.