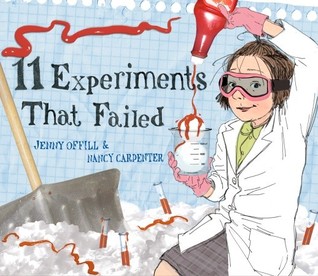 When I spotted a book about science with a picture of a girl on the cover, I had to borrow it from our library.  With a title of 11 Experiments That Failed, I knew Sophia would enjoy it. Besides the fact that she likes anything science related, she’s always talking about different experiments she wants to try.

Written by Jenny Offill, 11 Experiments That Failed is laugh out loud fun. Nancy Carpenter’s mixed media collages perfectly illustrate the experiments and our future scientist’s attempts to learn more about the world around her.  Each experiment begins with a question, a hypothesis and a list of materials needed. It reads like a young scientist’s journal. Before we read  the directions for the experiment, Sophia and I discuss whether or not her hypothesis is true.

If the premise of each experiment doesn’t make you chuckle, the directions are hilarious. One of Sophia’s favorite failed experiment is “Do dogs like to be covered in glitter?” The hypothesis is that “Dogs like everything.” The girl sprinkles pink glitter on her dog and releases him into the wild. So what happened next? The notes read “Dog ate glitter. Pink sparkly yard.”

Other experiments include “Is there a way to make stinky cheese smell better?”  that involve cheese and perfume plus “Would gerbils like bigger wheels?” where she takes a trip to the amusement park.

Another plus is that it demonstrates that even through failure, scientists can learn from their experiments. Sophia and I discussed how long it took Edison to find the perfect filament for the light bulb. I should have told her how the glue for Post-Its was discovered. She would have liked that story.

We’re definitely adding 11 Experiments That Failed our collection. Sophia has read it so often, I think she’s memorized the entire book. I also noticed that the author has another children’s book in the same vein,
17 Things I’m Not Allowed to Do Anymore. I guess we’ll have to get our hands on that one too!

What books are your kids reading lately?
I borrowed a copy of the book from our lovely local library. Affiliate links are included in this post.