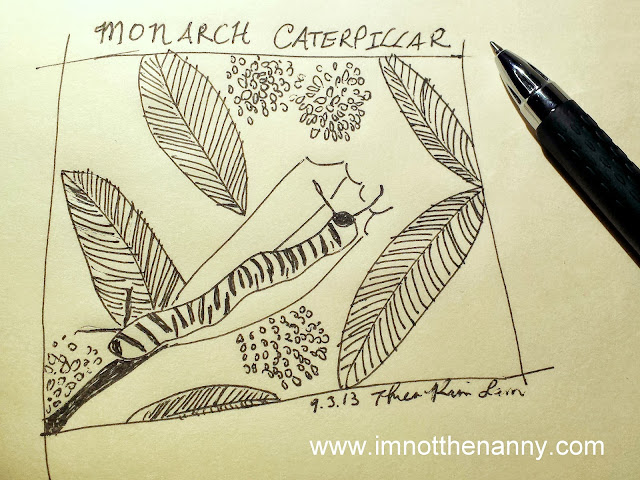 I have been working non-stop, it feels like. It’s what happens when I put in an hour here, another while Jaxson naps and a bunch more late at night. All this work means I’ve been staring at my computer screen many hours of the day. It’s gotten to the point that I don’t even want to read ebooks on my tablet. I’d rather read a book printed on paper.

Last night after dinner I could feel the itch to sit in front of a screen. It’s tough to ignore the call of Facebook, email, or even mindless games on my smartphone, tablet or desktop. The screens are too accessible. I forced myself to pull out one of my Moleskine cahier journal and draw.

I had planned on just doodling, but then I drew a leaf. Then another. Eventually I became inspired by our new caterpillar (who is twice as long today as it was yesterday!).

We went on a walk to search for milkweed this afternoon, but to no avail. I’m a little worried that the caterpillar will die and the kids will. freak. out. Tomorrow I have to figure out where to get milkweed!

The drawing did its job and I did feel a little more calm afterwards. I also resisted the urge to add just one more line to my drawing, which I tend to do. Not bad for a five minute doodle.