Last year,  Ellie of Musing Momma wrote a guest post sharing some crazy things people have said to her about her biracial children. (Seriously, go read the post.) I think it’s time for a follow-up, don’t you? 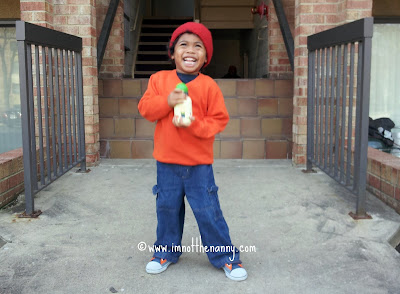 I thought I’d heard it all with my oldest, Sophia. I guess that’s not the case because I’ve gotten some new shockers when I take my 3-year-old son, Jaxson, to a mother and me class or when we’re running my errands. Sometimes I’m so flabbergasted, I have no idea how to respond without sounding like a crazy woman. Especially since my son will pick up on whatever I say. Instead of being snarky in real life, I’ll be a wee bit snarky here on the blog, if you don’t mind

Most of these comments are meant well, but come off as insensitive or offensive. I honestly believe that they’re so fascinated or interested in our multicultural family that they say the first thing that pops in their head. They have no idea how crazy or creepy they sound. Sometimes I have to hold my tongue when I see mixed race families too because it makes me warm inside. I want my kids to grow up seeing all different types of families, but I don’t want to point out each mixed race family like they’re we’re circus animals.

So here we go, what not to say to parents of biracial or mixed race kids-part deux:

Your kids are so beautiful. Will you have have another and give it to me? Did that make your creep-o-meter go off the charts? There’s so a many things wrong with this comment. Believe it or not, I’ve heard this from more than a handful of folks. Some of them were joking (I think) while others had an air of truth to them. I’m not a baby factory but I maybe I can start a side job popping out biracial babies. Kidding.

Where did you get him? I guess I must resemble Angelina Jolie and have a home full of adopted children from third world countries to get this question. Nope, still short and Asian. What baffles me is that I have received this comment from people of different ethnicities and/or nationalities. Even a Brazilian nanny asked me that. Oh, I know! They want a beautiful mixed race baby and want to know what big box store I bought him from. This is a comment in which I have no idea how to respond.

I’m looking for a nanny, are you available? A parent actually tried to “poach” me from my charge at the park one summer. My charge being my son of course. It’s one thing for some to ask if I’m my children’s nanny, yet another thing entirely to offered a job. “I wish I was paid to watch my own kids,” I responded with a laugh. I hope it didn’t come out as snarky as that reads.

Whew! Luckily, I hear less of these comments than I did a few years ago. I’m not sure if I just don’t notice or maybe I don’t let it bother me like it used to. Probably a combination of both.

While we’re on the topic, I think we need a secret sign or handshake for parents of biracial or mixed race children. Kind of like a “Hell yeah!” fist bump. One that says, I get you. We’re cool. What do you think should it be?

So what would you say to these comments? What remarks have you received?

READ MORE: My interview on NPR’s All Things Considered