Every year our family celebrates Têt Trung Thu. Also known as The Mid-Autumn Festival or the Moon Festival, Têt Trung Thu is the 15th day of the 8th month on the lunar calendar (the full moon). This year it falls on September 30 with a big bright full moon (I hope).

Even if you’re not Vietnamese or Chinese, your family can celebrate too! The festival begin during the Xia and Shang Dynasties (2000 BCE-1066CE) in China as a harvest celebration. Since Vietnam is heavily influenced by Chinese culture, my family celebrates Têt Trung Thu (prounounced “teht troong too”) as well.

Our family usually celebrates by reading folk tales about the moon festival, making or lighting lanterns, and we usually skip the moon cakes. (Find out why.) If you’re in the DC area, next week I’ll share some local Moon Festival celebrations you can take your family.

Before you sit down on September 30 to admire the full moon, learn more about the festival. Here’s some great books, videos, and of course the moon cakes.

Books About The Moon Festival 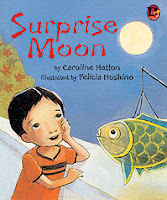 Children of the Dragon: Selected Tales from Vietnam (Harcourt) by Sherry Garland is a collection of Vietnamese folktales. In it is the story of Chu Cuoi (literally Uncle Laughter) who finds a magical banyan tree whose wife Nguyet Thien accidentally cut the trees roots. The magical banyan tree pulls out its roots and floats into the sky. Chu Cuoi grabs the tree to keep it on the ground but is pulled up to the moon instead. This is a great book to have in your collection.

Surprise Moon (Lee and Low) by Caroline Hatton is a perfect book for younger children. In this picture book, Nick who is Vietnamese American shares with his classmates about his favorite things about the the Mid-Autumn Festival. This book is a great introduction to the celebration.

Thanking the Moon: Celebrating the Mid-Autumn Moon Festival (Knopf) by Grace Lin shows how a Chinese American family celebrates the Moon festival. Our family loves Lin’s picture books. Her illustrations are bright and full of color.

A Full Moon Is Rising (Lee and Low) by Marilyn Singer is a collection of poems about different moon festivals around the world. It’s a good follow up after your family learns about the Mid-Autumn Festival.

Traditional Mid-Autumn Festival Foods
Moon cakes are the most well known food of the festival. They’re usually round like the moon and are filled with bean paste or nuts. Traditionally they have an egg yolk in the middle to represent the moon. They are very sweet and a treat for kids since traditionally this is the only time of the year moon cakes are consumed.

Our family has never made moon cakes. They’re time consuming and you need special molds. We usually buy ours from the local Vietnamese or Chinese grocer. If you don’t have one near, you can buy some from Mam Non’s etsy shop and help the non-profit organization that offers support for families with children adopted from Asian.

If you really want to make your own moon cakes, check out Andrea Nguyen’s video.
What kind festivals and holidays do your family celebrate? I hope you’ll celebrate the Moon Festival this year!

Lee and Low provided me with review copies of their books. The other books I personally purchased. This post contains affiliate links.