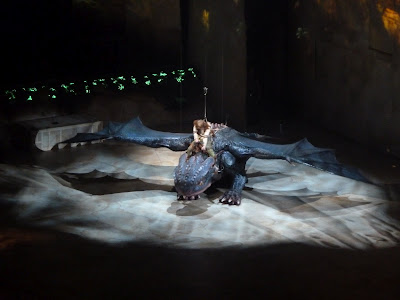 Robot dragons were all my toddler son could talk about last night, before and during How To Train Your Dragon Live Spectacular. Those animatronic dragons were spectacular indeed. No one in our family had seen the movie upon which the show was based, so we didn’t really know the story.

Trust me, you don’t need to know the movie’s storyline to enjoy the show. I already expected to be wowed by the dragons. The amazing background videos and special effects blew me away. The simplistic set transformed into a living, breathing, Viking world as various videos and lights were projected onto the set and the ground. That made the entire show for me. 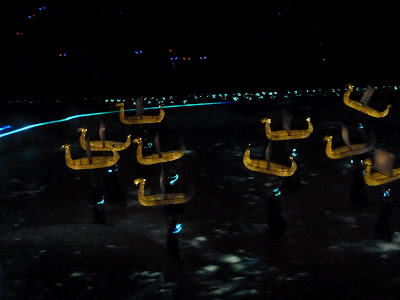 There’s also a great scene with shadow puppets in the first act as the dragon school trainees learn (and in turn, the audience) about the different species of dragons. In the second act, Hiccup’s father sail towards the giant dragon’s nest, which was illustrated by glowing in the dark.

The entire show was a feast for the eyes and ears. Sophia was mesmerized the entire time. When asked what her favorite parts were, all she could say was, “I liked everything.” That’s quite the endorsement from my 6 year old.

How To Train Your Dragon Live Spectacular is flying at the Verizon Center July 19-22.Tickets start at $29.50. There’s even VIP packages that gives backstage tours, photos and meet and greet with the characters. My readers can save 25% on weekday performances (including Friday nights) by using the code MOM in the box that says “Mommy Blog.”

My family and I receive tickets to the show in order to review it.