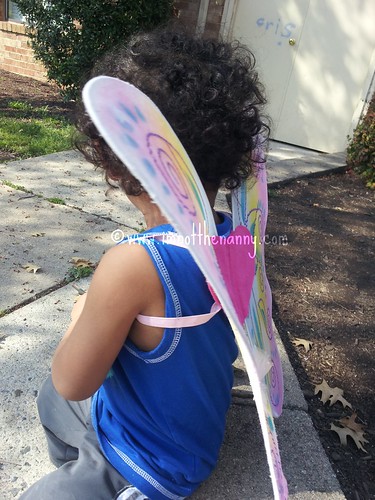 My toddler has entered an amazing developmental stage. Almost 2 1/2 years old, he’s started to pretend. It’s so fun to watch and see how his mind works. He loves making real smoothies with me so much that he now pretends to make his own with Legos. He even makes the whirring sound of my stick blender.

Jaxson also loves dressing up. So far he’s worn a pair of fairy wings to the bus stop to pick up his sister. He looked super cute as he rushed from one bush to another pulling off leaves. Like a fairy. (Sorry, had to go there.) Because his sister loves princesses, he’s donned her sparkly princess dress. With her help of course. He’s also put her her headbands and jammed out on his “electric” guitar. My mom sent Sophia some hair clips for Easter and he’s asked to put those in his hair too.

I didn’t bat an eye when he asked to wear the wings every afternoon for a week straight. Took photos when his sister dressed him as a princess, complete with tiara. It’s cute and harmless. Plus he’s having so much fun. I’m not worried that he’ll grow up to be gay (like my mom jokes) or worry about his masculinity. He’s only 2 years old! He’s exploring the world around him.

With Sophia, I tried to give her many different types of toys: gender neutral ones along with “girl” and “boy” toys. Just my luck that she loves princesses and pink. After a while I gave in and accepted it. I also encouraged her love of science and dinosaurs.

Like many parents, we pared down on the number of toys we purchase when we had our second child. We kept a lot of Sophia’s baby and toddler toys. There was no need to buy more toys when both kids preferred cardboard box and bubble wrap. Now that Jaxson has outgrown most of the toddler toys, he’s digging through his sister’s.

Now I’m wondering, am I doing him a disservice by not giving him more “boy” toys? He has plenty of toy cars, but they’re not his favorite. Most of our cars and trains were given to me by well-meaning friends. You know because my child has a penis so he must like trains and cars, right? He prefers to rock on out his drum set and all 8 of his toy guitars. He even has a working microphone that he uses frequently to serenade me.

I definitely plan on buying him some more dress-up clothes. I’ll throw them all in a bin and let him wear whatever he wants. What are good choices? Fireman, doctor, policeman? I think we have the Rockstar props already. Does he really need more “boy” toys?
I’m sure this isn’t a big issue for families who have boys first. It just makes me realized that I have to be aware of both sides of the equation for my kids. I prefer to let the kids decide for themselves what types of toys they like. I also think it’s time that Jaxson has more of his toys and not just his sister’s toys.
How do you encourage your child’s play?