Last night as we cuddled up for our nightly bedtime story, I thought, here go, yet another version of Cinderella. This particular one didn’t show up in the rotation as often the other princess books, but still, I’ve read it more times than I can remember.

As I read about the mean stepsisters and a wicked stepmother, Sophia pointed out excitedly, “Mommy, that Cinderella is just like me!” I paused.

“Oh? How is Cinderella like you?” I’ve learned not to put words in her mouth.

“She’s dark skinned like me! And has curly hair like me!” I nodded as she listed what she and Cinderella had in common. “She’s kind like me! And generous like me!” By this time Sophia was bouncing up and down with excitement. I affirmed her observations, trying not to beam with pride. Yes, Sophia liked that this Cinderella had dark skinned, but Sophia also attributed kindness and generosity to both herself and the princess-to-be. 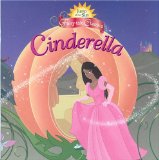 Soon, Cinderella met her Prince, who wore his hair in corn rows. Sophia interrupted me, “Mommy! Everyone in this book is dark skinned like me! There aren’t very many books with dark skinned princesses.” We paused reading for a bit and tried to think if we had any dark skinned princess books. Sadly we could only think of one, The Princesses Have A Ball.

After Cinderella slipped on her glass slipper and married her Prince, I tucked my little princess into bed. I remembered my post from this past February, Do we really need a black princess? It seemed like a perfect time to revisit it. (If you haven’t read it, go ahead. I’ll wait.) Maybe it was time to rethink black princesses.

Obviously, Sophia noticed and pointed out Cinderella’s lovely brown skin. We’ve read that particular book many times, and I don’t remember ever pointing it out, though hubby and I have talked about it when Sophia wasn’t around. What surprised me the most was how excited Sophia became when she realized that everyone in the book had dark skin. Then she connected the dots and realized that in almost every princess book we’ve read (and we’ve read a lot!) there weren’t any dark princesses.

Now when I say princesses, I’m talking about the classic fairy tales that we’ve all grown up with: Cinderella, Sleeping Beauty, Rapunzel, Snow White, etc. The ones that most people equate with Disney. Yes, we’ve read many different cultural versions of Cinderella, like Glass Slipper, Gold Sandal. To me, as great as the multicultural Cinderella stories are, it’s not quite the same for a little girl.

How many of us imagined ourselves in Cinderella’s or Sleeping Beauty’s shoes when we read their stories or watched the Disney movies? I’m pretty sure Sophia imagines the same. When we read about the Chinese Cinderella or the Arabic Cinderella, it’s not quite the same.  I have a copy of the Vietnamese Cinderella (Tam & Cam), but our version, The Brocaded Slipper, doesn’t have enough illustrations for a 6 year old. She identifies as American and Vietnamese. She can pretend she’s in China or Saudi Arabia, but she’s never been to either country so she can’t easily imagine herself as that specific princess.

Sophia loves every Cinderella story we read, no matter the princess’ skin tone. We talk often about how inner beauty is more important than what’s on the outside. Now that she’s in school, she hears more about race and skin color. Even her classmates ask her why she doesn’t look like me. Race is going to be a bit more complicated to discuss as she grows up and can understand all its societal nuances. I’m learning on the fly.

What struck me this time is that she noticed. She saw the difference between this Cinderella book and her other ones. I could see how excited it made her. I could tell she wants to see herself in the books we read.

I remember feeling this way growing up. Every issue of Seventeen, every tv commercial, every sitcom, anything, anywhere, I looked for an Asian face. I felt like I won the lottery when All American Girl featured an entire Asian-American family! I recently learned the term for it. Asianspotting, they call it. Heck, I still do it. I don’t want Sophia to be constantly searching like I did.

I know I’ve debated the black doll versus white doll, but now that she’s older, she notices how people react to race and skin color.  Especially hers, since our family doesn’t “match.” Skin color or race is not the determining factor of a person’s morals, ethics or personality. I’ve taught her that already. Maybe now it’s time to to reinforce how unique and beautiful she is by making sure she is surrounded by good role models that look like her.

Do you surround your child with dolls, books, etc showing kids that look like your child? How you talk about the differences between your child and the illustrations?

What are your favorite dark-skinned princess stories?

This post was inspired by story of Cinderella from the Jump at the Sun series. Jump at the Sun features many of the fairy tales we’ve grown up with except all the people in them are African-American. It looks like most of the books are out of print. I don’t remember where we got ours-either the thrift store or a used book store.

Last night, I asked my Facebook and Twitter friends to recommend princess stories with dark-skinned princesses. Once again, I am amazed by my resourceful friends. I‘ll share with you tomorrow all the great recommendations! Here’s the list of black princess books and movies. This post is long enough already.