Want to hang out with some tall blue men performing awesome tricks on stage? No, it’s not a kinky show, it’s the Blue Man Group! As well as performing live on stage, they’ve also been on The Tonight Show, Ellen and Regis & Kelly. These bald, blue headed men (women? will have to research that one) play music on non-traditional instruments, throw paint and much more.

Check out this video:

As you can see, the Blue Man group is all about shows and concerts that combine music, comedy and multimedia theatrics to produce an experience you’ll never forget. Especially if you’re sitting in the poncho section of a live show. I’m not sure I’d want to sit there, but the view is probably fantastic. There’s no spoken language during the show either, so it’s all music and body language to portray their story.

As someone who used to work in the theatre, I’ve always admired the talent and skill it takes to do what they do. There’s no way I could catch paint balls in my mouth and spit them on a canvas to make art. I’ll totally watch them do it! 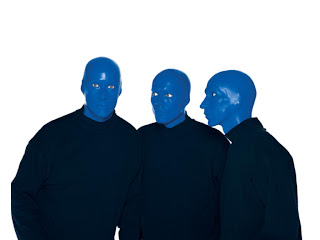 How about a date night with your honey? If you’re in the DC Metro area Blue Man Group is playing at The Warner Theatre from March 23 to April 3. With 16 different performances, you can find a time that works for you. Tickets can be purchased by phone at 800-551-7328 or online at Ticketmaster. Tickets range from $32-$92.

I also have a discount code for YOU, my readers.  Simply purchase your tickets Ticketmaster and enter code BLISSFUL for a $5 discount for shows on Wednesday March 23; Thursday, March 24; and Sunday, March 27. It’s not a huge discount, but every bit helps right?

I’m giving away 2 (two) tickets to one of my lucky readers to see the Blue Man Group for the Wed, March 23rd performance at 7:30pm. So line up the sitter and treat yourself to a night out.

To enter, leave a comment telling me what you did for your last date night. I sat on the couch and watched disaster movies with hubby.

For extra entries, do any of the following AND leave an additional comment for each one you did.

Please leave your email address where it asks for it so I can contact you if you win(only I can see it). Any entries without an email address will be deleted.

I will draw a winner at Sunday, March 20 in the evening and email the winner. You must respond by 9AM Monday to confirm. If I don’t hear from you, I will draw another name.

For another chance to win tickets, visit TechSavvyMama.

Disclosure: I received a pair of tickets to the show for hosting this giveaway. I really need the date night!

CONGRATS to Monica, who won the tickets!  If she doesn’t claim them by 9AM, Monday, I will draw another name. Thanks to everyone who entered.

Congrats to Sara from @cookwith5kids whose name was drawn after no response from Monica.